In the Gorge of Sant’Andrea there is a beautiful tract of Roman basalt, still in excellent condition, more than two hundred years after the road was built.

One of the reasons for the excellent preservation of the tract is due to the sophisticated engineering technique used to create the road in the Roman period.

According to procedure, the edges were installed first of all in order to lay out the direction of the road and then the earth was excavated and the huge stones which formed the foundations were positioned.

Then, on the layer created in this way, a layer of mortar was laid mixed with small stones.

Only then were the basalt slabs laid, on top of the last layer to form the pavimentum.

To make it easier to lay the basalt, a slab of stone with a very smooth surface was laid with a wedge-shaped under part. 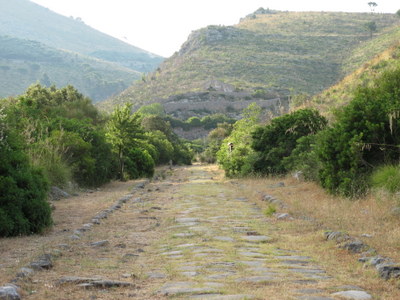